SushiSwap, one of the leading DEX’s in the crypto space, was a victim of the bear market like many others. However, a new Messari report suggested that SushiSwap may be showing some growth in terms of transactions and revenue.

.@uniswap key metrics looking 🟢 over the last seven days according to our Protocol Metrics feature. pic.twitter.com/g6XMGNnQqj

The leading crypto analytics firm, tweeted about this development on 22 October. As per the data provided by Messari, SushiSwap witnessed growth on multiple fronts in the last seven days. Furthermore, Sushiwap’s revenue grew by 61.52% since the last week. Growth was also observed in Liquidity Pool transactions and Trading volume.

Moving on to some not-so-pleasant issues

Despite the growth that SushiSwap observed, it still lagged in certain domains. As can be seen from the image below, SushiSwap failed to compete with Uniswap when it came to pool values. Over the last few months, Uniswap managed to show significant dominance over SushiSwap in this regard. 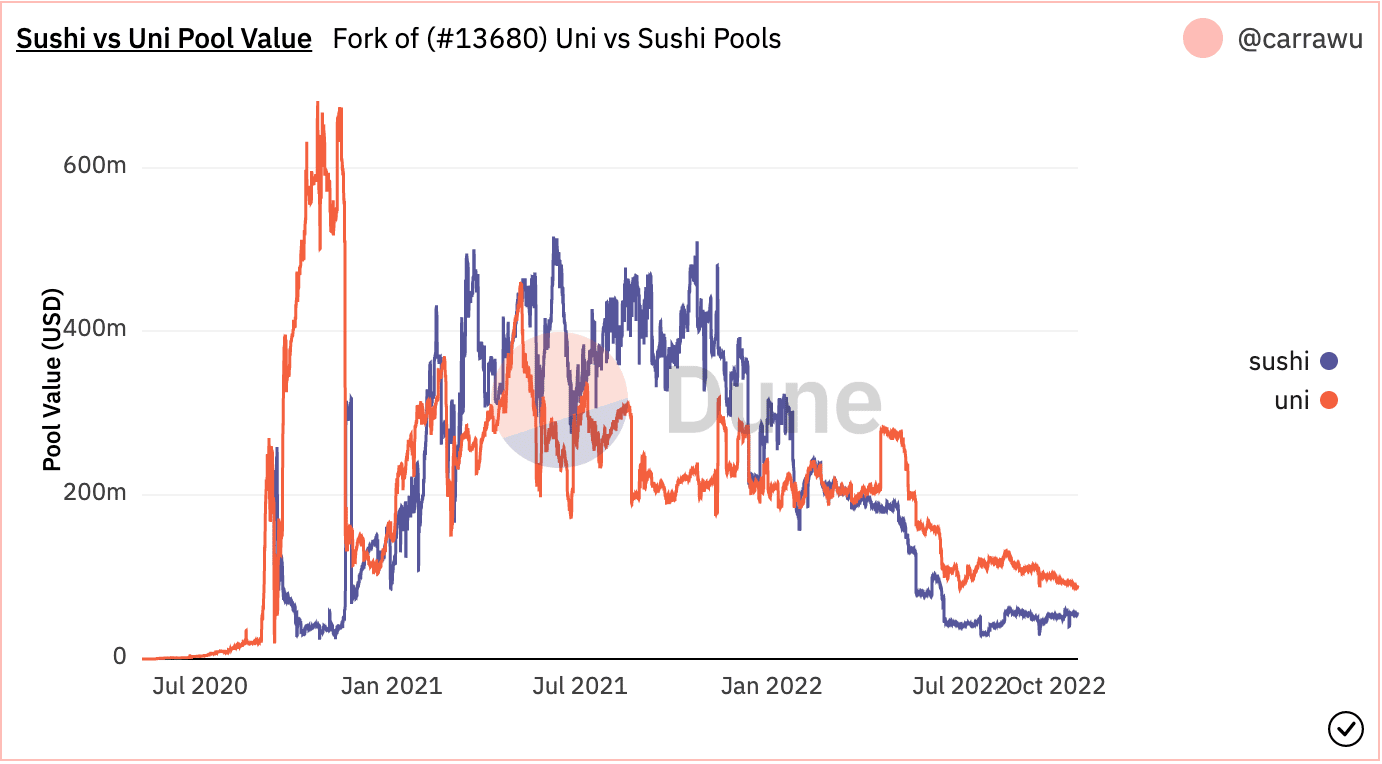 Despite both positive and negative factors being at odds with each other when it came to SushiSwap, its TVL remained relatively stable. Despite the slight depreciation in terms of TVL over the past couple of months, the overall movement of SushiSwap’s TVL was flat since the last few weeks. At press time the total value locked by SushiSwap stood at $491.47 million.

To improve its chances of success in the future, SushiSwap may want to show improvements in this area.

Coupled with that, there were other bearish signs against SushiSwap as well.

Some bear invites on the way

At the time of writing, the SUSHI token was trading at $1.33 and had appreciated by 2.22% in the last 24 hours according to CoinMarketCap. Its market cap had observed similar growth as well however, its volume depreciated by 20.40% in the same time period.

5 Promising New Cryptos To Buy During The Bear Market

How did the FTX collapse impact the Web3 gaming industry?

One Metric Is Flashing a Bullish Signal for Bitcoin and Ethereum, Says Crypto…

Despite growth, AAVE lags behind this competitor on this metric front