In 2021, the market was dominated by exuberance and optimism. Cryptocurrency companies were spending tens, if not hundreds of millions of dollars for mainstream marketing campaigns, major celebrities were endorsing NFT projects and crypto exchanges, and social media hype drove meteoric price increases for meme coin projects like Dogecoin and Shiba Inu despite their questionable fundamentals. Venture capitalists were pouring record amounts of capital into the sector, leading to an unprecedented amount of unicorns coming out of the crypto and blockchain industry.

With all of this in mind, it’s pretty clear that the crypto markets needed a reality check as valuations were becoming completely decoupled from real world utility or adoption of the technology.

However, there is another extremely important aspect of the current crypto market slump. From a global perspective, the macroeconomic outlook and geopolitical instability are at their worst since Bitcoin was launched back in 2009. The biggest source of global uncertainty in the present moment is of course the ongoing Russian invasion of Ukraine. With the help of weapons supplied by the West, Ukraine has seen notable success in regaining some of its occupied territory, but the chances of the conflict ending in the short term appear to be slim at best.

With this context in mind, let’s take a look at the most important news events and trends that shaped the cryptocurrency and blockchain sector in Q3 2022. Let’s first take a look at the performance displayed by the top digital assets by market capitalization, Bitcoin and Ethereum.

While there were ups and downs along the way, Bitcoin started and ended Q3 at almost the exact same price. BTC was trading at just below $19,500 on July 1, and ended the quarter at a price of about $19,350. The total cryptocurrency market cap increased from $906 billion to $958 billion (+5.7%) in the same time period.

The quarterly peak for BTC came in mid-August, when the Bitcoin price touched just above the $25,100 level. The quarterly low was put in on September 22, when the BTC price came dangerously close to falling below $18,000.

While Bitcoin’s performance in Q3 was certainly not exciting, it provided some relief following the disastrous -56% price crash in Q2. It’s also worth keeping in mind that Q3 is historically the weakest quarter for Bitcoin by a significant margin.

Q4 is historically the strongest quarter for Bitcoin, which can provide some hope for the bulls. 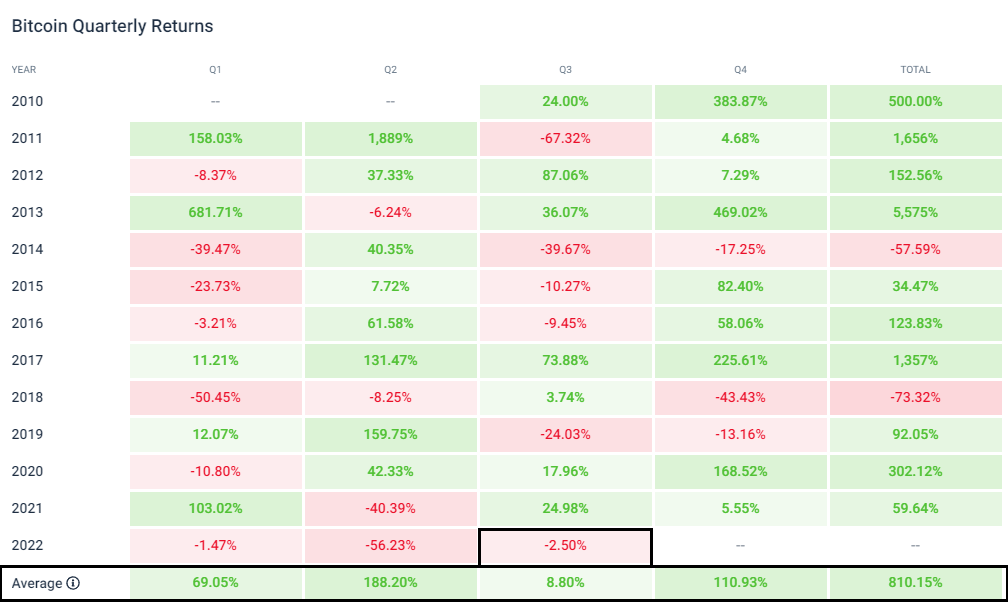 The action in the Ethereum market was a lot more compelling in Q3 than what we saw from Bitcoin. Ethereum started the quarter off strong, with the ETH price climbing from $1,060 on July 1 to a quarterly peak of $2,040 on August 14. ETH’s quarterly low came on July 13, when the bulls managed to keep the price Ethereum price from slipping below the psychologically significant $1,000 price level.

Ethereum’s big rally in the first half of Q3 was likely driven by anticipation for the Merge, a technical upgrade that transitioned the Ethereum blockchain from a Proof-of-Work consensus mechanism to a Proof-of-Stake consensus mechanism. The upgrade, which was in the works for several years, was successfully completed on September 15 without any notable difficulties.

As is often the case in the crypto markets, the Merge turned out to be a “buy the rumor, sell the news” event. The ETH price reached a local peak one month before the upgrade went live, and saw an accelerated decline after the Merge actually happened.

LUNC was the best performer in the crypto top 100

The best performer of Q3 in the cryptocurrency top 100 was LUNC, the native token of Terra Classic. The token, which still has a hugely inflated supply due to the collapse of the UST stablecoin in May, rallied hard in the beginning of September and has retained a significant portion of its gains despite a price correction.

The enthusiasm for the coin was driven to a large extent by social media hype. The controversial history of the Terra ecosystem combined with the opportunity to “revive” a once important blockchain platform has resulted in a fervent online community of LUNC supporters. LUNC now shares many similarities with “meme coins”, including the low price per unit which can make a cryptocurrency appear “cheap” to less sophisticated investors regardless of its actual market capitalization.

Other strong performers in Q3 included GMX, Lido DAO Token, Quant and Chiliz. All of these tokens more than doubled in price, showing that the crypto markets still contained plenty of opportunities despite the uninspiring performances displayed by Bitcoin and Ethereum.

The worst performer in the crypto top 100 was HNT

The worst performer in the top 100 was Helium’s HNT token, which recorded a 43% price drop in Q3. The project received negative press for allegedly misrepresenting the nature of some of its partnerships. However, Helium fans have plenty to look forward to, as the project is planning to transition to the Solana blockchain and a Helium-powered mobile carrier called Helium Mobile is set to go live in early 2023.

Green Metaverse Token, The Sandbox, Basic Attention Token and Loopring were also among the worst performers of the quarter.

The most notable crypto news events of the quarter were the Ethereum Merge, as well as the collapse of several prominent companies in the crypto and blockchain industry.

Ethereum successfully completed its highly anticipated Merge upgrade on September 15. As a result, Ethereum no longer uses the energy-intensive Proof-of-Work consensus model to validate transactions, as the network is now maintained by validators that are staking their ETH coins. The transition to Proof-of-Stake has reduced Ethereum’s energy consumption by more than 99%, which could make the network more attractive to a broader audience.

In addition, the Merge has brough a significant reduction in the amount of issued ETH. According to estimates from the Ethereum Foundation, around 13,000 ETH was being issued per day to reward miners under the Proof-of-Work system. Now, the network only needs to issue about 1,600 ETH per day to reward validators. This will drastically slow down the inflation of the ETH supply. Depending on how much ETH is burned through EIP-1559, we could even see ETH become a deflationary cryptocurrency in the future.

The next step for the Ethereum project is the Shanghai upgrade, which will make it possible for stakers to withdraw their ETH.

Three Arrows Capital collapsed as part of an industry-wide rout

At the beginning of the year, hedge fund Three Arrows Capital was considered one of the most reputable crypto-native investors. The hedge fund managed an estimated $10 billion in assets as of March.

Three Arrows Capital had significant exposure to the Terra ecosystem, which saw a complete collapse in May. In total, around $60 billion was wiped out as both the LUNA token and the UST stablecoin crashed towards zero.

The fund’s founders Su Zhu and Kyle Davies said that the Terra collapse resulted in a loss of about $200 million for the company. However, the collapse of Terra had a domino effect on the entire cryptocurrency market, which caused further losses for Three Arrows Capital. The company became unable to pay off its debts and filed for bankruptcy in July.

Three Arrows Capital was far from the only casualty of the collapse of Terra and the subsequent crypto market crash. Here are examples of companies that froze withdrawals of customer funds. Some of the companies on the list have filed for bankruptcy.

Other notable crypto events and trends

Beyond the two biggest stories, there were also a number of other significant news and trends for the crypto and blockchain space in Q3 2022.

Macroeconomic factors continued to have a big impact on the cryptocurrency markets. Rising interest rates tend to reduce demand for riskier assets such as cryptocurrencies and tech stocks, which is why the crypto market has been closely following inflation figures and monetary policy updates, especially in the United States. Monthly releases of Consumer Price Index (CPI) statistics and the U.S. Federal Reserve’s interest rate decisions drove short-term volatility in the crypto market.

Multiple crypto CEOs stepped down from their positions

An interesting trend from Q3 2022 is that the CEOs of many prominent crypto and blockchain industry companies have stepped down from their roles. Some of the most notable CEO departures include:

Read More: Ethereum Merge One of the Few Positives for Cryptocurrency and Blockchain Sector—Q3 2022

Cosmos (ATOM): Does the Reward Outweigh the Risks?

Here’s What’s Next for Dogecoin, Binance Coin, Polygon and One Ethereum Rival,…

Is Tycoon (TYC) Worth the Risk Thursday?

Oryen Network Will Surpass TWT In Market Cap – The Cryptonomist

Mooners and Shakers: Bitcoin and top cryptos dip a little as recession fears bite US

Should You Sell HyperAlloy (ALLOY) Tuesday?