Trading exchange Coinbase Global (COIN 8.54%) has suffered during the broader cryptocurrency sell-off as asset prices in popular cryptocurrencies have declined due to waning investor sentiment when compared to prior periods. Generally speaking, since its initial public offering a year ago, Coinbase’s stock price has traded in lockstep with Bitcoin. However, this could signal how little some understand Coinbase’s entire business. While the company primarily serves as an exchange to buy and sell crypto tokens, Coinbase has a variety of other products and services, including non-fungible tokes (NFTs), crypto wallets, and advanced trading features like derivatives.

Coinbase stock is down roughly 50% over the last month. However, after a bleak first-quarter earnings report, the company has experienced a slight bump thanks in large part to institutional and insider buying. 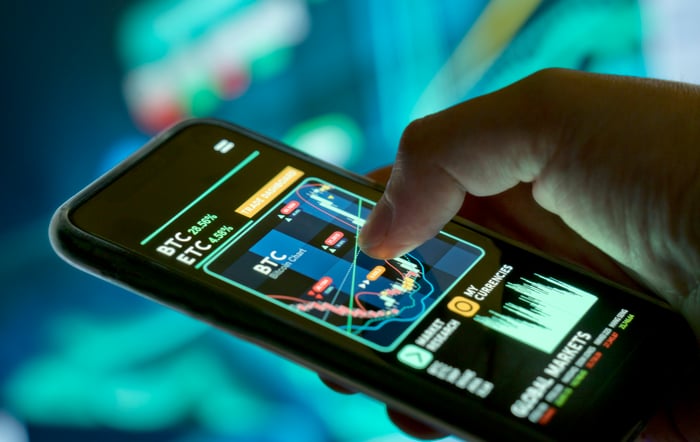 Is the crypto party over?

For the quarter ended March 31, Coinbase reported total revenue of $1.2 billion and a surprise net loss of nearly $430 million. That’s a year-over-year revenue drop of 35% and a reversal from net profit of $771 million in the year-ago period. The company attributed the drop in sales to a decline in transacting users and trading volumes. The number of “monthly transacting users” dropped from 11.4 million in the previous quarter to 9.2 million in Q1.

The drop in monthly transacting users was seen in both the retail side and institutional side of Coinbase’s business.

Although Q1 2022 illustrated a steep decline in trading activity, investors should keep in mind that institutional trading volume was $215 billion in Q1 2021, which signals that large banks and investment funds have generally adopted crypto at a higher level over the past year. Moreover, despite recent drops in more mainstream protocols such as Bitcoin, Ethereum, or Solana, the total value of assets on Coinbase’s platform has increased significantly since Q1 2021, with retail assets up 22% and institutional assets up roughly 10% over the past 12 months, thanks in large part to more available holdings on the platform and higher net inflows over the last year.

Unfortunately, the sharp decline in revenue was not the only hiccup in Coinbase’s earnings report. While the company has consistently generated high profit margins, Q1 was a different story. Total operating expenses in Q1 were $1.7 billion, an increase of 112% year over year. The largest increases were in technology and development as well as general and administrative expenses. The increase in operating expenses were primarily due to personnel-related expenses as well as technology development as Coinbase focuses on new product initiatives. Coinbase ended Q1 with over 4,900 full-time employees, an increase of over 30% from Q4 2021.

Following Coinbase’s Q1 earnings, Wall Street could not be more divided about the company’s future.

Ark Invest CEO Cathie Wood holds almost 8 million shares of Coinbase. While the savvy tech investor has been consistently buying the stock since January, Wood has recently doubled down on her crypto thesis as she accumulated nearly 1 million more shares following the earnings report.

While Wood and at least one insider seem to be bullish on Coinbase’s long-term prospects, traditional Wall Street banks remain uncertain over the company’s direction. Mizuho analyst Dan Dolev recently expressed bearish sentiment during an interview with CNBC, explaining concerns about Coinbase’s ability to capture and sustain additional market share, the long-term adoption of cryptocurrencies, and the company’s aggressive hiring. By comparison, Oppenheimer analyst Owen Lau believes Coinbase is trading at opportune levels for long-term investors, highlighting increasing engagement from large institutions as it relates to crypto.

While investors got a front-row seat to how much capital has been deployed building the company’s NFT platform, as well as its pursuit of more sophisticated products such as derivatives, which are also offered by Coinbase competitors Gemini and FTX, management made it clear that these applications will be pivotal for the evolution of crypto. Since the NFT function was released in April, and some of the newer features of Coinbase Wallet were rolled out during Q1, investors do not have significant data to determine if the company can execute on these developments.

Although Coinbase’s near-term outlook for Q2 is generally lower than Q1 due to declining transacting users and trading volumes, coupled with high operating expenses due to hiring, management explained to investors that the company’s spend is calculated and that it is necessary in order to be the market leader crypto ecosystem. Interestingly, despite lackluster Q2 guidance, the company’s full-year 2022 estimates remain unchanged as it believes crypto will bounce back should investor sentiment in the broader market do the same.

While the broader crypto market experiences heavy selling, investors with a long-term mindset may view this as an opportune time to add or initiate a position in Coinbase stock.

Where to go from here

Since its initial public offering, Coinbase stock is down over 80% as of the time of this writing. Buying a stock as it continues to drop can be hard to do, but now may be a good time to dollar-cost average into the stock, or initiate a position, if you believe in the long-term potential of crypto adoption. Investors will want to keep a keen eye on future earnings results and ensure that Coinbase is demonstrating value creation from its new revenue streams and product developments, while sustaining a strong balance sheet and healthy liquidity should it face continued volatility and market pressures down the road.

What Does The FOMC Minutes Portend For The Crypto World?

With Kim Kardashian Fined $1.3 Million for Crypto Promotion, Which Other Celebs Could…