Crypto.com Coin Is Making a Comeback Despite Flak Over the Matt Damon Ads 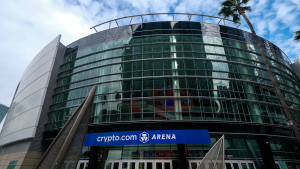 But now, as of Feb. 22, 2022, the price of COIN crypto has drifted higher to almost 40 cents (33.97 cents). And this is despite the general downturn in both the stock market and cryptocurrency markets.

And even more to the point, this is occurring right after the Russian invasion of Ukraine on late Feb. 21.

Moreover, Crypto.com took a lot of flak for its Matt Damon ads on TV and the Internet extolling the virtues of Crypto.com exchange. A whole series of articles has since come out castigating the theme of the ads.

The reason is that the ads seem to imply that investing in cryptos on Crypto.com is kin to man’s most noteworthy achievements. This has spurred “backlash” according to the Financial Times magazine as “cringeworthy.”

Effect of the Ads

But despite these smears, and especially since Matt Damon himself doesn’t seem to care, the ads have had a subtle effect. First of all, apparently, the ads are still running.

Second, the COIN crypto price has not done nearly as badly as other cryptocurrencies. It’s not easy to say whether this is solely due to the Matt Damon ads — but it certainly didn’t hurt.

Third, I don’t think Americans really care that much. At least American males — the largest group of people who are buying cryptos. There have been many “elite” criticisms and roasts of the crass nature of the ads, including from the likes of the Independent magazine in the UK. They “mocked” the ads.”

But in the end, these ads have served a purpose. I made this point in my previous two articles.

Matt Damon is seen as Jason Bourne, an intelligent spy, buying cryptos. That is the subtle point that the ads make.

Therefore, many male crypto buyers associate COIN crypto and Crypto.com as something that Jason Bourne would do. I pointed out that it even worked on me, as I set up an account at Crypto.com (although I have yet to buy COIN crypto).

“Fortune favors the brave.” That is the thematic point that Damon makes in the 55-second ads. The implication is that by setting up an account at Crypto.com you will be “brave” to invest in cryptocurrencies.

Matt Damon doesn’t seem to care about the criticism. And good for him. He gets to collect a big paycheck and plug doing something that he probably believes in. More to the point — he knows that it’s mostly young men buying cryptocurrencies these days — and he doesn’t feel too much pressure about that.

And you know that you have arrived when the South Park comedy animated series starts to make fun of the situation. In the series premiere this month, the characters said this:

“We just have to be brave… But not too brave or else Matt Damon will come and take all our money.”

This was according to a recent article in CoinTelegraph online magazine. The series went on to make fun of Damon by pointing out an obvious fact. That is that the crypto market has taken a major downturn right after the Matt Damon Crypto.com ads came out. As a result, at least to South Park, the ads seem to imply that you are brave if you lose money investing in cryptos like COIN crypto.

It’s unfortunate that the Matt Damon ads came out right before a major downturn. But, of course, no one could have known whether this would occur.

So, if you think that the Damon ads have had a beneficial effect on the COIN crypto price, you might want to double down or average down. This would be a good time to lower your overall investment cost in the crypto.

On the date of publication, Mark Hake directly held a long position in VeChain crypto but not in any other of the securities mentioned in this article, either directly or indirectly. The opinions expressed in this article are those of the writer, subject to the InvestorPlace.com Publishing Guidelines.

Mark Hake writes about personal finance on mrhake.medium.com and Newsbreak.com and runs the Total Yield Value Guide which you can review here.

Read More: Crypto.com Coin Is Making a Comeback Despite Flak Over the Matt Damon Ads

Citi CEO Jane Fraser: ‘If grandma’s investing in crypto, we better have protections…

Reasons ETH investors can be disappointed despite Ethereum’s latest milestone